Kabir Bedi, guest at the Short, tells the humanitarian experience of Care&Share 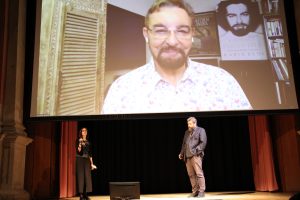 Among the main guests of the eleventh edition of the Ca’ Foscari Short Film Festival there was also Kabir Bedi, an internationally renowned Indian actor known – for example – for his role as to the legendary Sandokan of Salgari, who was interviewed by Ca’ Foscari’s Professor Stefano Beggiora.

Meanwhile he was working on these films, he had the opportunity to come to Italy and to establish a deep bond with our country. He always remembers it with emotion as “it gave me so much, both on a personal and on an emotional level.” Bedi was also present at the festival as global ambassador of the Italian humanitarian association Care&Share which supports children in need in India.

The actor stated that he firmly believes in the importance of the cultural bonds between his Country and Italy. The same values which his parents – who fought for Indian independence and peace – taught him: “We shall definitely not lose the tight ties between our two Countries, which have developed numerous relations throughout the years.” For this reason, Kabir Bedi decided himself to play a role in them and became the official ambassador of Care&Share: a humanitarian association born in Venice which provides education to plenty of children born in poor conditions in India, which helped almost 20.000 young people from 1993 to the present day. Bedi stated how India, severely hit by the second wave of Coronavirus, is now healing and how “in the recovery process Care&Share played an important role in the areas where it works.”

Bedi – whose biography Stories I must tell – The tiger is still alive. is out – put his and the association’s humanitarian commitment at the centre of his speech, explaining how large and small donations are essential to support it. His appeal went to the world of cinema, which must do more than it already does, to spread the knowledge and work of associations such as Care&Share around the world.

Bedi went personally inside the structures where children are helped by the association with technicians and cameras and shot documentaries – whose extracts were screened – that the actor hopes will be widespread in a short time. From his speech, the image of a multifaceted man was outlined. A man who more than anything else believes in the deep bond between his native country and the country that conquered him, Italy. A man who is firmly convinced that cinema, true protagonist of the Ca’ Foscari Short Film Festival, is a very valid way to promote it.