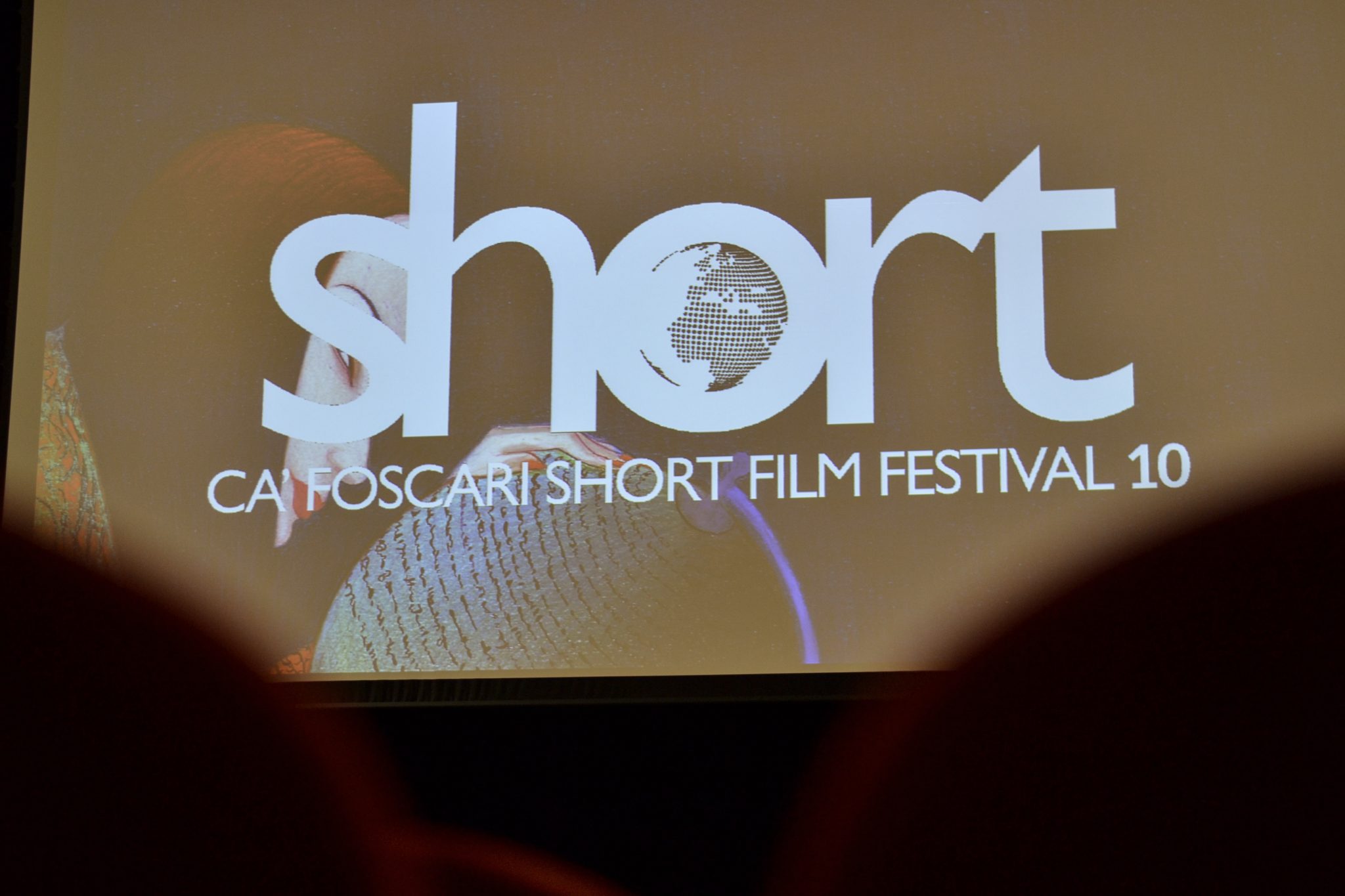 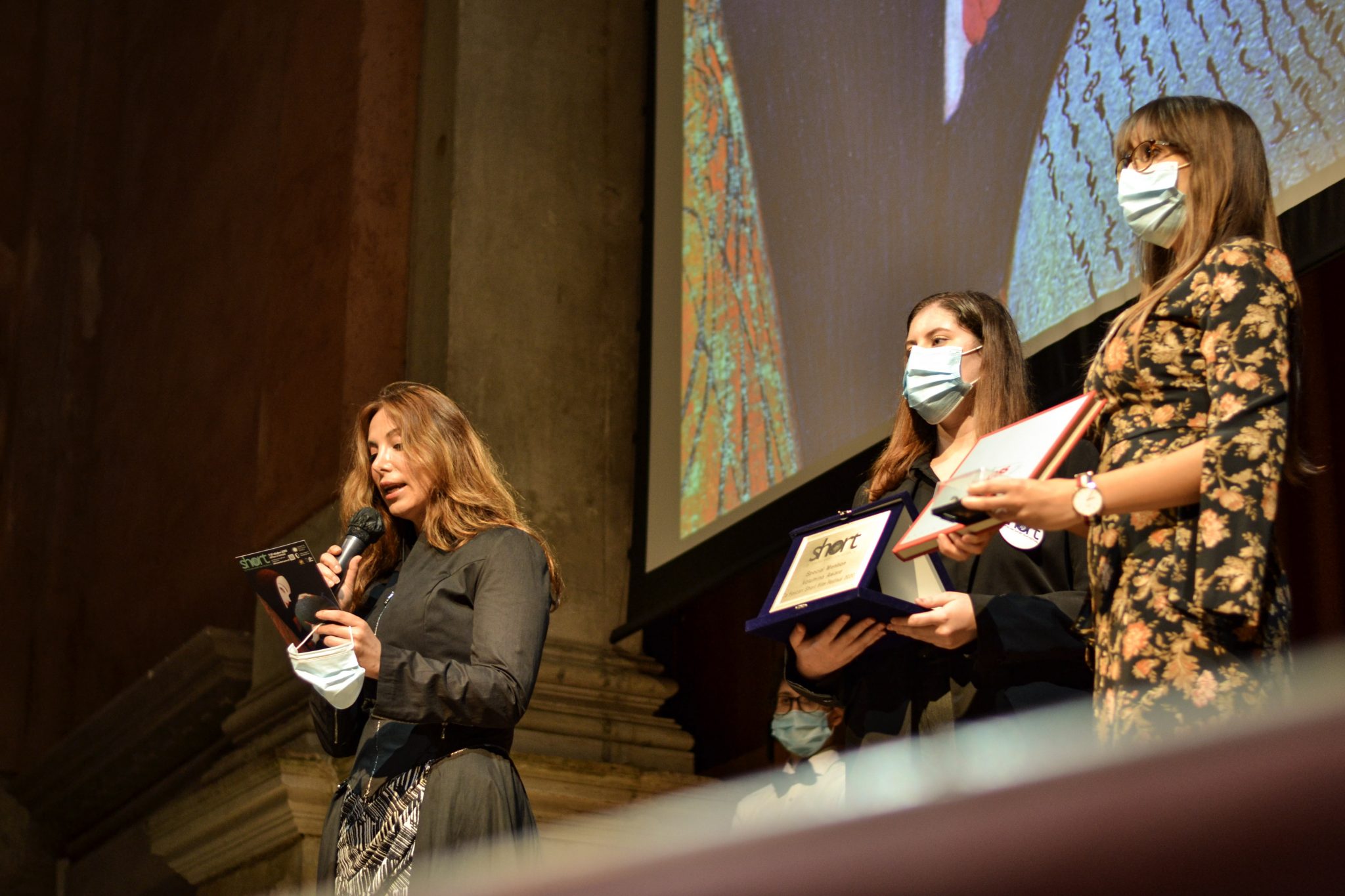 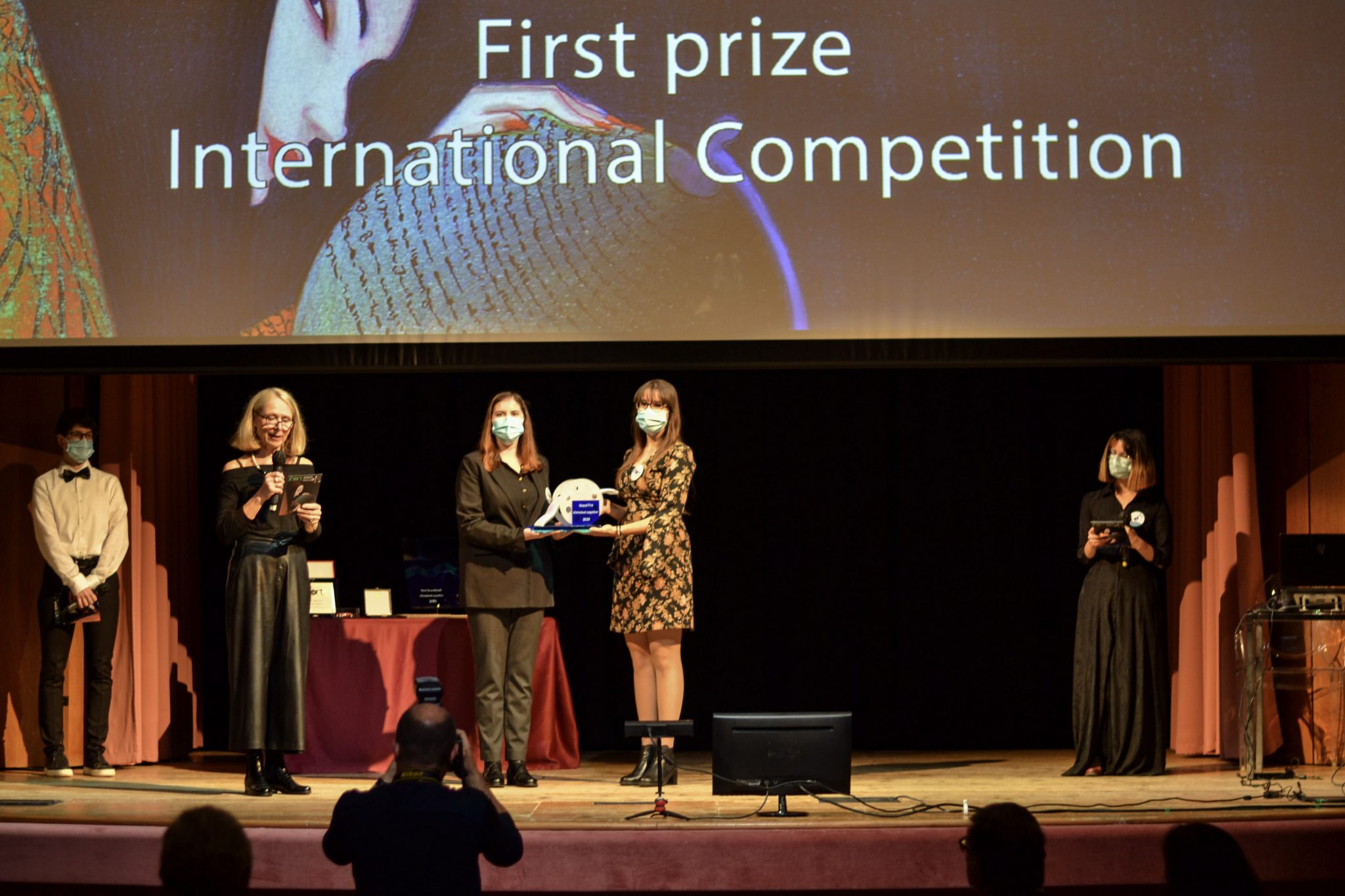 ALL THE WINNERS of the CA’ FOSCARI SHORT FILM FESTIVAL 10

ALL THE WINNERS OF THE CA’ FOSCARI SHORT FILM FESTIVAL 10

DCERA – DAUGHTER by the Czech director Daria Kashcheeva wins the tenth edition of the Ca’ Foscari Short Film Festival, the first festival in Europe entirely conceived, organized and managed by a university.

The Special Mention Volumina Award goes to the Belgian MOTHER’S by Hippolyte Leibovici, while the Levi Award for the Best Soundtrack goes to VÄRVID MUST-VALGEL – BLACK AND WHITE COLOURS by German Golub from Estonia. Fabiana Serpa wins the ‘Pateh Sabally’ Award with THERESE.

The Olga Brunner Levi High Schools’ Award goes to HED – ECHO by Eli Bleier from Israel. The winner of the Music Video Competition is MTV IS MY FRIEND by the Moldovian Radu Popovici.

During the Award Cerimony, the Ca’ Foscari Honorary Fellowship has been bestowed upon DARIO ARGENTO and the marvelous play dedicated to Fellini, produced by Igor Imhoff with the performance of the actor Marco Tonino, was staged.

VENICE, 11th OCTOBER 2020. The short film DCERA – DAUGHTER (Czech Republic, 2019, 14’44”) by Daria Kashcheeva, produced by Prague’s FAMU – Film and TV School of the Academy of Performing Arts, is the winner of the International Competition of the Ca’ Foscari Short Film Festival tenth edition. It is the first festival in Europe entirely conceived, organized and managed by a university, and this year for the first time it “spread” all round Venice, for the screenings have taken place, besides the iconic Auditorium Santa Margherita, also at: Fondazione Ugo e Olga Levi, the Centro Candiani of the Municipality of Venice, Fondazione Querini Stampalia, Galleria Giorgio Franchetti alla Ca’ D’Oro, Museo di Palazzo Grimani, Museo Archeologico Nazionale, Fondazione Bevilacqua La Masa, Concilio Europeo dell’Arte In Paradiso Art Gallery and the Hotel NH Venezia Rio Novo.

The International Competition awards have been assigned by the International Jury, formed by the actress Jun Ichikawa, Japanese by birth but Italian by adoption, the Syrian animator and videoartist Sulafa Hijazi, currently residing in Germany, and the Polish actress Maria Mamona. The Grand Prix, the Levi Award and the Best Music Video Award consist of prestigious artistic statues in Murano glass thought and manufactured by the master glassmaker Alessandro Mandruzzato.

The Grand Prix to the best short film of the Competition, announced by the juror Maria Mamona, went to Dcera – Daughter by Daria Kashcheeva with the following explanatory statement:

It is an extremely moving and emotional film, fervently imaginative, and Beautiful cinematic language. Through a simple story and without dialogue or any words the movie brought us to a deep journey reflecting the complex relationship between a father and a daughter.

Daughter is an animated film about the difficult relationship betweeen a father and a daughter. It begins with the protagonist already grown up next to the paternal deathbed. She remembers with deep remorse her childhood, which has been influenced by the unhappy relationship with her father, in a spiraling bitterness caused by mutual miscommunication and the inability to properly show affection. The Czech director Daria Kashcheeva, with already an Oscar nomination for this short film, thanked the jury and the audience via video message. For Daughter, she opted for the stop-motion technique, making the characters with painted paper, a material that allowed her to create a surprisingly expressive silent dialogue through their gestures. Indeed, the short film tries to express through this effective technique, and without words, the plight of the time lost and the imperative of understanding and forgiving.

The Jury ha salso conferred the Special Mention Volumina Award, dedicated to the better contribution to cinema as an art, to the Belgian short film MOTHER’S (Belgium, 2019, 20’) by Hippolyte Leibovici from the Institut National Supérieur des Arts (INSAS). The award, bestowed by the juror Sulafa Hijazi, consists of a plaque and a prestigious photobook about cinema produced by Volumina. The artwork has won with the following explanation:

Faces, mirrors in a dressing room, the characters share with one another parts of their hidden life during a make up session, showing us the beautiful Fragility of the human being. Then, at the end they astonished us with a phenomenal performance.

The director Hippolyte Leibovici – who thanked the Festival with a funny videomessage – meekly opens a window into the lives and art of drag queens with this documentary: the characters, who are genuine, authentic and painfully real, express themselves freely while getting prepared for their show in the changing room. This way, he can address the themes of identity and generational difference, which are strong splitting factors also inside the LGBT community. The key figure is a “mother”, not always understanding or understood like all mothers, but firmly standing her ground as a defender.

The Levi Award for the best soundtrack (music, dialogue, sound effects), offered by the Fondazione Ugo e Olga Levi and conferred by a separated jury made by  Roberto Calabretto, Paolo Troncon, Daniele Furlati and Marco Tutino, went to VÄRVID MUST-VALGEL – BLACK AND WHITE COLOURS (Estonia, 2019, 17’58”), produced by the BFM – Baltic Film, Media, Arts and Communication School and directed by German Golub. The award, has been bestowed the Fondazione Levi director Giorgio Busetto with the following statement:

The film makes use of a soundtrack characterized by “contemporary” music, which fits perfectly to the story and underlines the mental instability of the protagonist. The conjoined work carried out with the orchestra is excellent, especially the rendition of the dissonant strings that emphasizes the confusion of the protagonist.

Set during the transition from black-and-white to colour television in the 70s, Black and White Colours focuses on a news anchorwoman, a veteran of the small screen who refuses to accept the merciless withering of her youth. The violin score, skillfully combined with disorienting diegetic sounds, unveils the protagonist’s mental breakdown while the line between reality and delusion becomes more and more blurred.

The “Pateh Sabally” Award, offered by the Municipality of Venice, Murano, Burano and dedicated to the memory of the Gambian young man tragically perished in the Grand Canal in January 2017, has been bestowed upon THERESE (Svizzera, 2019, 29’), made by the German-Brasilian director Fabiana Serpa from ZHdK – Zurich University of the Arts and about the true emancipation story of a woman. In 1888, Therese, a Bavarian botanist, sailed off for an expedition in Brasil. The young woman soon had to face the hostile demeanor of the local guide who, unaware of Therese’s noble origins, refused to follow her orders. Inspired by the story of Princess Therese of Bavaria, the short film explores the themes of women’s independence and gender equality: thanks to her determination, she will defend her rights against hostility and cultural clashes. The award has been conferred by Giovanni Andrea Martini e Marco Borghi on behalf of the Municipality of Venice, Murano and Burano with the following statement:

A film that focuses on a true story from the late nineteenth century to show how women, although restrained by important family traditions, can strive for and achieve equal rights for everyone.

Then, a jury made by Roberto Calabretto, Cosetta Saba and Marco Fedarlo announced the winner of the seventh edition of the Olga Brunner Levi Award, created by the Fondazione Ugo e Olga Levi in collaboration with the Ca’ Foscari Short Film Festival. The award is bestowed upon the best short film made by high school students from all around the world and that must be focused on the female musical performance or the historical relationship between music and the female condition. The winner is HED – ECHO (Israel, 2019, 3’19”) by the very young Eli Bleier from Zomer High School. The stop-motion animation is inspired by Haruki Murakami and is about the loss and rediscovery of hopeful glimpses of light through painful memories. The award has been conferred by the Fondazione Levi president Giorgio Busetto with the following statement:

The film stands out for its aesthetic, intertextual, literary and cinematographic modulation. The use of the stop-motion technique to explore the inner feelings of the lost young sister is excellent. The usage of the original language, Hebrew, is also convincing: it allows the viewer to empathize with the intimate thoughts of the protagonist, as well as the voice-over technique. The soundtrack is also excellent.

Lastly, the fourth edition of the Music Video Competition, dedicated to music videoclip made by university and film school students from around the globe. The winner is MTV IS MY FRIEND (Romania, West University Timișoara, 2019) by the Moldovian Radu Popovici. The president of the Fondazione Bevilacqua La Masa Bruno Bernardi conferred the award with the following statement:

The videoclip carefully focuses on details and artistic flair. Content, plot and realization are particularly admirable. The transitions are well made and a good mixture of emotions transpires.

Through an attentive depiction of the Romanian rock band Sarmale Reci’s song lyrics, Radu Popovici tells the story of Cristi, a young man who is unable to make sense of his lonely and depressing life, to the point of planning suicide. His life will find meaning again thanks to music, which will become a way to escape the everyday life through imagination.

The Closing Ceremony of the tenth Anniversary Edition of Ca’ Foscari Short Film Festival has been introduced by the new Rector of the University of Ca’ Foscari in Venice, Tiziana Lippiello, who first and foremost congratulated all of the Staff – in particular, the volunteer students of Ca’ Foscari – for the lavish effort put in place for a successful tenth edition of the Festival despite all the adversities. A heartfelt thank you had to be done to the nine partner organizations that allowed Short to spread and “occupy” all of Venice in an actual combined attempt to promote culture in the Lagoon City.

It was then time for one of the most anticipated events of the Festival, with the bestowal of Ca’ Foscari Honorary Fellowship to Dario Argento by the Rector herself. The master of horror joined the ceremony via video call with the Festival’s Artistic Director Roberta Novielli, reminding especially the importance of daring, being it with the shooting camera, with plots (“that the critics thought were foolish at first”), with music or with colors. In a festival where young directors are the main core, Argento underlined how it is necessary to keep alive the desire to tell and know, advising them to collect a lot of knowledge, but most of all, experiences, as he did with music, cinematographic criticism, screenplay, etc… Argento ended his speech with a little regret for a movie he never got to film in Venice, a city that still is a special one for his heart.

The Closing Ceremony has been embellished with the performance of Igor Imhoff, who wanted to honor the great filmmaker Federico Fellini, for the centenary of his birth. The purpose was to remark upon the eclecticism of the director through a multimedia and interactive performance: starting with images from some of the most loved movies of the Director, Imhoff combined a live interpretation by Marco Tonino in front of an animated background, making real and virtual interact, while images were matched with a new interpretation of the typical soundtracks of Fellinian movies, curated by Davide Tiso.

To end the evening, instead of the usual greetings of the volunteers on the Auditorium’s stage, a brief video made up of all the personal’s students’ goodbyes has been shown, thanks to them the Festival was made possible. As conclusion, after the customary farewells and greetings, the director Roberta Novielli, has given everyone an appointment at the eleventh edition of the Ca’ Foscari Short Film Festival, which will be held from 24 to 27 March 2021.