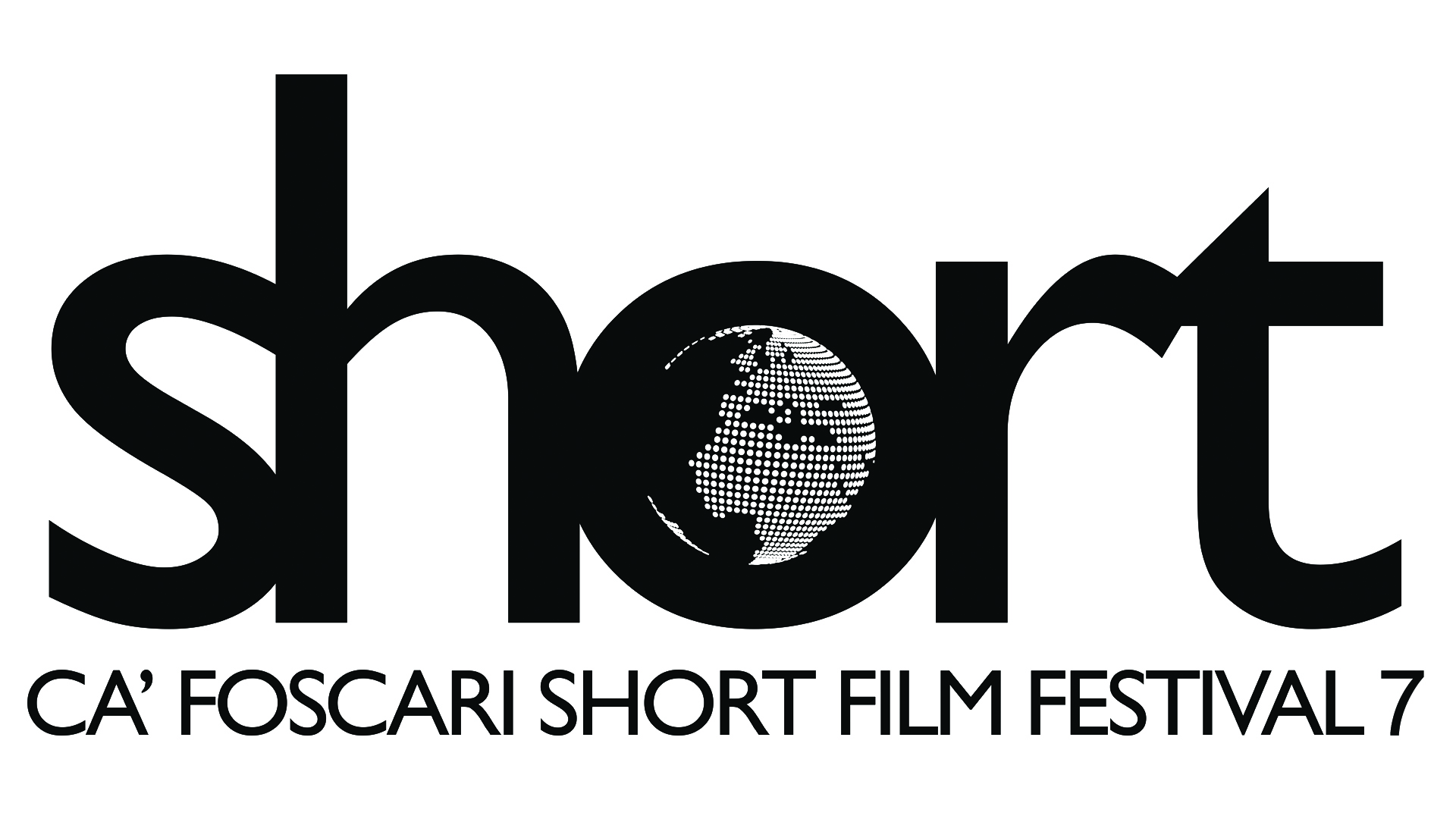 The English short film Amygdala by George Graham won the International Competition of the seventh edition of the Ca’ Foscari Short Film Festival, the first Festival in Europe conceived and organized by a University.

The Volumina Special Mention was awarded to the Australian short film Petrel by Charles Broad, while the Levi Award for Best Soundtrack went to Śledztwo –  The Inquest by Polish director Ena Kielska. David Borbás won the “Pateh Sabally” Award for Sightseeing.

A Long Travel by Alessandro Sicari won both the First Prize and the Special Mention of the Pasinetti VideoContest in the Veneto High Schools’ Competition. The “Olga Brunner Levi”’s prize was awarded to Musica rifugio by Marta Zigante.

The Closing Ceremony also saw the wonderful live performance by sand-artist Iimen Masako linking Venice to Japan in her work. 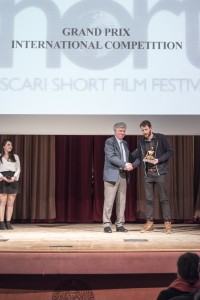 The English short film Amygdala (Great Britain, 2016, 10’) by George Graham,  produced by one of the most renowned English schools of cinema, the National Film and Television School, is the winner of the International Competition of the seventh edition of the Ca’ Foscari Short Film Festival, the first Festival in Europe conceived and run by an University, whose aim is to present new tendencies in cinema and to discover new talents from schools of cinema from all over the world.

The international jury composed by the French artist Catherine Breillat, the Polish actress Małgorzata Zajączkowska and the English animator Barry Purves assigned the Grand Prix of the International Competition to Amygdala by George Graham. The award was handed over by Flavio Gregori, Pro-Rector to Cultural activities and relationships at Ca’ Foscari University of Venice, and consists of an artistic sculpture made of Murano’s glass, ideated and realized by the artistic glassmaker Vivarini. The jury awarded the prize with the following motivation:

The jury very much enjoyed the complexity of this film, the technical challenge of shooting in the streets,  the cinematography, the performance,  and the editing of the non linear narrative. The film was a cinematic and emotional portrait of an interesting life.

Noticeably moved, the young director, who was born in 1993 and with already three short films at his hands, thanked the jury and all the collaborators of the Festival from the stage of the Auditorium, especially for the warm hospitality received. Bella is the main character in Amygdala, a young woman who walks down the chaotic streets of Hackney, London. Surrounded by different people, Bella gradually becomes more and more detached and isolated, while constantly reliving the memories of her last girlfriend, Sofia, a passed love who doesn’t want to and can’t be forgotten. As In this short but intense short movie, Bella travels around the city, she also comes to term with herself and her past, she wanders at the mercy of her amygdala, the area of our brain which stores memories, emotions, and fear. 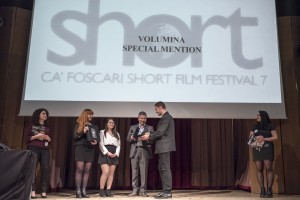 The Jury has also assigned the Volumina Special Mention to the work that offers the best contribute to cinema as art, to Petrel (Australia, 2016, 12’08’’) by Charles Broad from the Sydney Film School. The prize, handed over by the artistic director of Volumina, Domenico De Gaetano, consists of a luxury shooting book about cinema produced by Volumina. The short film was awarded for the following reason:

The jury enjoyed the movie as a technically accomplished piece of tense, clever film-making.

Petrel is the name of an abandoned service station located in the middle of the Australian countryside. Dan, a young businessman on the run, is trapped there while some unreal events take place, representing and bringing to extreme consequences some wrong choices he made during his life. A nightmare with no getaway, characterized by an obsessing and upsetting location and soundtrack; a twisted reality where it is not possible to escape from the past — and especially from oneself. 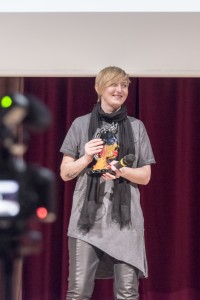 The Levi Award for Best Soundtrack (music, word, sound), offered by Ugo e Olga Levi Foundation and awarded by a jury composed of Luisa Zanoncelli, president of the Foundation scientific committee, Roberto Calabretto, from Udine University, and Gabriele Roberto, renowned international composer, went to  Śledztwo – The Inquest  (Poland, 2016, 18′) by Polish director Ena Kielska from Wyższa Szkoła Techniczna of Katowice. This Polish short film is a tribute to the history of noir cinema, which doesn’t base the film on the plot – a common story about a detective looking for his family in a gloomy, disturbing city – but on the peculiar cinematographic technique she used: the stop-motion pixilation art, a visually “twisted” technique that makes the film like it has been shot on an old film reel. A dark, ironic and grotesque tale which distorts the perception of reality to investigate the dark sides of todays’ world. The prize, handed over by Luisa Zanoncelli, consists in a prestigious glass sculpture made by Vivarini, and was assigned with the following motivation:

The soundtrack reveals a solid compositive thought which answers with sureness to the narrative requirements. The game with the time-musical-stereotypes has perfectly been done both regarding the variation technique and the auto-ironic connotation of the use of the trumpet with the mute. The author manages to obtain what he wants to tell by using traditional and electronic tools with creativity. The re-elaboration of the rumours and the editing of sound/rumour/word/silence are amazing.

The first “Pateh Sabally” Award, offered by the Municipality of Venice, Murano and Burano to commemorate the boy from Gambia tragically drowned in Canal Grande last January, was awarded to Sightseeing (Sweden/Hungary, 2016, 29’45’’) by David Borbás. The short movie features the friendship between two outcast characters: Bruno, a hopeless petty thief who steals a taxi in Budapest, and Dunja, a young foreigner who offers him 500 euro for a lift to Wien. The light-hearted, though ragtag, journey undertaken by these two “losers” still trying to survive takes place with the Hungarian exodus of the past years on the background. A hint of humour and hope during Europe’s dark times. The prize is an artistic piece made by the master glazier Paolo Crepax. It was handed over by Giovanni Andrea Martini, President of the Municipality of Venice, with the following explanatory statement:

Ironic and bitter, it gathers in the casualty of the narrated events humanity and need of mutual help. As subtopic, the really actual and extremely painful issue concerning the rejected refugees. Only if openminded, goodhearted and willing to know the Other, it can be done a lot more, even during paradoxical situations. 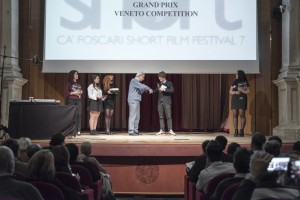 As for Veneto High Schools’ Competition, dedicated to short films by students from high schools of the Veneto region, the winner was decided by a jury chaired by Carlo Montanaro and formed by students from Ca’ Foscari University of Venice. The First Prize was awarded to A Long Travel (Italy, 2016, 4’44’’) by Alessandro Sicari (Liceo Artistico Giovanni Valle, Padua). Carlo Montanaro motivated the decision of the jury as follows:

Because of its simplicity, able to encourage the public to use its imagination and gained through the importance given to ellipses and voice-overs during the narrative sequences and through inventive cinematographic techniques, such as stop-motion. Because of its ability to depict in an original way the several phases concerning a boy’s growth, which everyone can identify to.

Thanks to the freshness he was able to use in order to show certain steps concerning a hard phase, such as the teen years are, trying to look positively towards the future, though.

It was then the turn of the fourth edition of the “Olga Brunner Levi” Award, established by the Ugo and Olga Levi Foundation with the partnership of the Ca’ Foscari Short Film Festival. The award is dedicated to the best video clip realized by Italian high school students, having as subject a female musical performance or the relationship between the female condition and music through history. The winner, selected by a jury made by Luisa Zanocelli, who has personally handed over the award, Roberto Calabretto and Roberta Novielli, is Musica rifugio by Marta Zigante with the following motivation:

For the grace with which a common experience is told; for the ability to reproduce the breath of the psychological time; for the elegance of the visual aspect, which is able to narrate a web of thoughts and feelings, and, in the end, for the yield of the simple but efficient music choices, even regarding the timbre profile.

The report of the closing ceremony 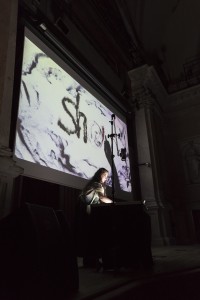 Flavio Gregori, Pro-rector to the cultural activities and relationships at Ca’ Foscari University of Venice, introduced the closing ceremony praising the success of its seventh edition and congratulating on the increasing quality of its artistic offer.

Right before the awards of the International Competition, Iimen Masako – one of the greatest sand artist in the world – took the stage for a live performance. While during the special program dedicated to her stop-motion works Iimen’s hands never appeared moving on the sand, her live performance of the Closing Ceremony showed her hands harmoniously moving on the backlit table. She created scenes and characters which evolved under the artist’s light touch on the screen of the Auditorium, linking Japan to Venice in a composition transforming from Mount Fuji and the well-known bullet train shinkansen into a gondola on a canal. At the end of her narration, she also drew the word “Short 2017”, in honour of the Festival.

At the end of the ceremony, Roberta Novielli, heart and soul of the Festival since its birth, called all the voluntary staff up on the stage of the Auditorium to thank them for the diligence and the enthusiasm they give every year to the Short, and receiving a well-deserved applause from the audience.

This link to the pics of the awards and the closing ceremony:
https://cafoscarishort.unive.it/wp-content/uploads/2014/12/ClosingCeremony2017.zip

This link to alla the pictures, clip, releases, press review, etc of the seventh editon:
https://cafoscarishort.unive.it/en/press/