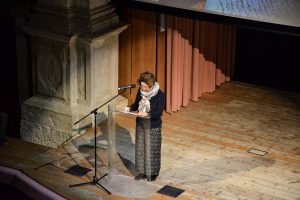 HOMAGE TO THE PASINETTI VIDEO COMPETITION COMBINING CINEMA AND LANDSCAPE

The second day of Ca’ Foscari Short Film Festivaltenth edition began with the Short Meeting Point: a moment of confrontation between the aspiring directors of the Master in Fine Arts and Filmmaking and the Festival’s guest filmmakers, who could express their opinion on the students’ artworks.

Among the over three thousand applications received this year by the Ca’ Foscari Short Film Festival, this edition has been reported to be the one with the most participations from African film-makers. Such wide and lively selection needed to be honoured with a specific programme, the New African Cinema,meant to promote a diversified cultural reality and the richness of its thematic potential. As a matter of fact, in Africa the cinema is often inserted in the history and in the social dynamics of the its continent, although it being underrated internationally speaking. The three short films that have been screened during this edition face feelings and drama of everyday life, and they even deal with social matters of global impact, such as immigration and condemnation of tribal traditions. These short films tackle different topics; however, the presence of strong female characters represents their common denominator. Naisula – Misfitby Kenyan filmmaker Karanja Ng’endonarrates the life of a young woman, Naisula, who’s in search of freedom from local conventions and denounces, at the same time, the ritual of infibulation. Simi, by Nigerian directorJohnson E. Awolola, is the story of a lady who, while reminiscing her father, returns with her memory to the happiest moment of her life. Finally, Gulf, by Walter Mzengifrom Tanzania, tackles the theme of immigration through the story of a woman who discovers that she must lose a part of herself to be fully accepted by her new community.

In the afternoon the traditional “Francesco Pasinetti” Video Contest took place, proving once again its importance as a meeting point between professionals and young talents of the Venetian film panorama. President Michela Nardin and director Daniela Manzolliintroduced the winners of last year’s edition, including Eduardo Vieitez with Mama – Mumfor first place, Love is Love by Alessia Pischedda for the “Diversity as a value” prize, Salviamo la faccia – Save faceby Giulia Merendafor the “Documentary and documentation” prize, Cartoline da Venezia – Postcards from Veniceby 5AL class students from Liceo Valle for the special youth prize “Venice: A City”. Again this year the Festival stressed the close relationship between the festival and the local territory, promoting independent realities and emerging directors within the Venetian area. Special attention was given to short films focused on environmental, cultural and social issues, and to the documentary genre as an effective way of representing the relationship with the city of Venice.

Twelve were the works presented today for the International Competition that opened with the Lebanese director Gilbert Karam and his project Alnajma,that has brought to the scene the famous actress Aida as she retires to her dressing room to enjoy the success of her last performance. Aida turns out to be a fragile and lonely woman. Initially praised and acclaimed for her talent, now she has to face the indifference of people and to live the everyday life in its banality, just like any other person. Afterwards, War Game was screened, an experimental short film with a highly theatrical setting that stands as a denouncement against modern media, made by the Iranian Mehrnoosh Fetrat and the American Jon Appel Temple University. The war between the United States of America and the fictional state of the Cubuchilia is narrated by Harry, an American soldier who secretly profits from the conflict and, for this reason, makes sure that this never comes to an end. The projections continued with Ardhviraam, by Abhishek Gowda, taking viewers backward in time to the dramatic moment of the “Partition” in 1947, when new borders were drawn along the northern limits of India to give space to the new-born state of Pakistan. However, Khalid, a schizophrenic writer, seems to be affected by nothing but his own personal drama: the conclusion of his most ambitious novel.

Inspired by Japanese art of the gyotaku, a print method on traditional paper, the French director Pierre Lazurus, from the school La Fémis, presented the short film,Le chante de Neptune, imagining a new world where fishes vanished and the only trace left is prints of their fossils. In an enchantment and mystery, the protagonist realises shows for children, in which he tells the story of the small fish Neptune, while he keeps hidden the fact of owning the last living fish on Earth. Nominated for Oscar 2020 as Best Animated Short Film, Dcera – Daughter,through a series of metaphors, narrates a complicated and silent relationship between a father and his daughter and their attempt to establish an complicity. Throught the stop motion technique, the director Daria Kashcheeva of the FAMUof Praga, thanks to dynamic sequences and still images, emotions and misunderstandings, makes the daughter retrace her childhood disappointments in search of the affection and love of a father who, on the other hand, feels inadeguate. The German-Brazilian director Fabiana Serpa, of the Zurich University of the Arts, inspired by the biography of Therese von Bavern, pays homage to the figure of the princess and especially her great humanity in Therese.The short film is set in 1888, when Teresa decided to embark on a four-month trip to Brazil, a choice not without difficulties, but that allows us to reflect on various existential themes, reaching the deepest roots and instincts of the human soul.

The second part of the International Competition was inaugurated by Romance del robo del sacramento, a Spanish short film directed by Antonio Llamas (from ECAM),who came and presented the movie himself. Set in the director’s hometown before it was abandoned, the movie is a realistic picture of the old world vanishing away and the impossibility of conceiving a new one. Domani all’alba, by the Italian director Giulia Di Battista (from CSC Rome), is about Amerigo, a pater familiaswho was not called up for military service in 1943, and who is thus taking good care of his beloved daughter Annetta, who’s sick and in urgent need of treatments. The portrait of this family going through hard times offers the director the opportunity to explore such themes as the conflict between the individual and society, popular superstitions, religion, and science. Fuego Lento, a Colombian short film by Joan S. Viáfara, skillfully exploits lights and photography – whose use was inspired byMoonlight – to stage Jorge’s inner conflict. Born and raised in ultra-catholic Colombia, Jorge finds himself struggling with his growing attraction towards his colleague Ramiro, after years of being a married father of one child.

Hippolyte Leibovici also presented his short Mother’s.He is a young Franco-Belgian director who lives his relationship with cinema as a desire to achieve anything meaningful, especially for the LGBT community. His documentary brings the audience into a four-generation drag queensfamily’s life which is full of provocative elements, like the final representation of The Last Supper.

Dezel Nitzan, an Israelian director and also a Berlinale Talents Program’s student, wrote and directed many shorts that have also been shown in various festivals. His last work, Noa, is about a single mother in search of a job and that after meeting Yair (family man and vice president of a successful company) hopes for his help. Sometimes, however, working interests become feelings.

At last Charlie Manton, a Londoner writer, director and a Student Academy Award’s winner, presented on the stage of Auditorium Santa Margherita his short November 1st. The work, which sees as protagonist Lindsay Duncan, offers a view on the deficiencies of a mother-daughter relationship. 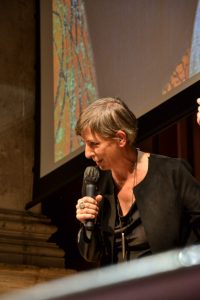 The short shows the woman and her daughter on a trip to assist at the execution of his son’s murderer, and her struggling with the idea of a reunion with a daughter who’s now a stranger.

In the evening took place the long-awaited meeting with the illustrator e director Lorenzo Mattotti, who discussed his long career with the animation specialist Davide Giurlano.