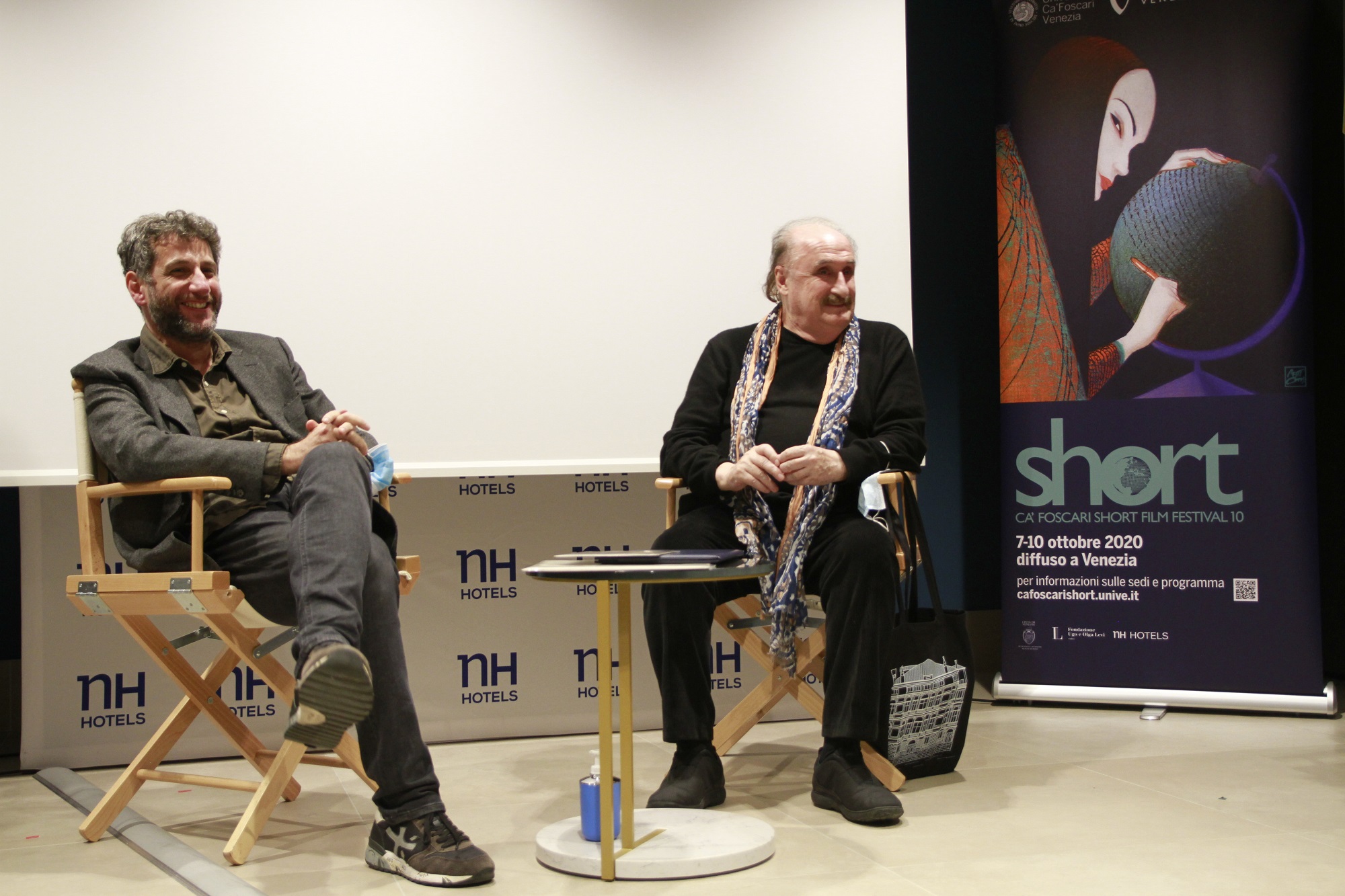 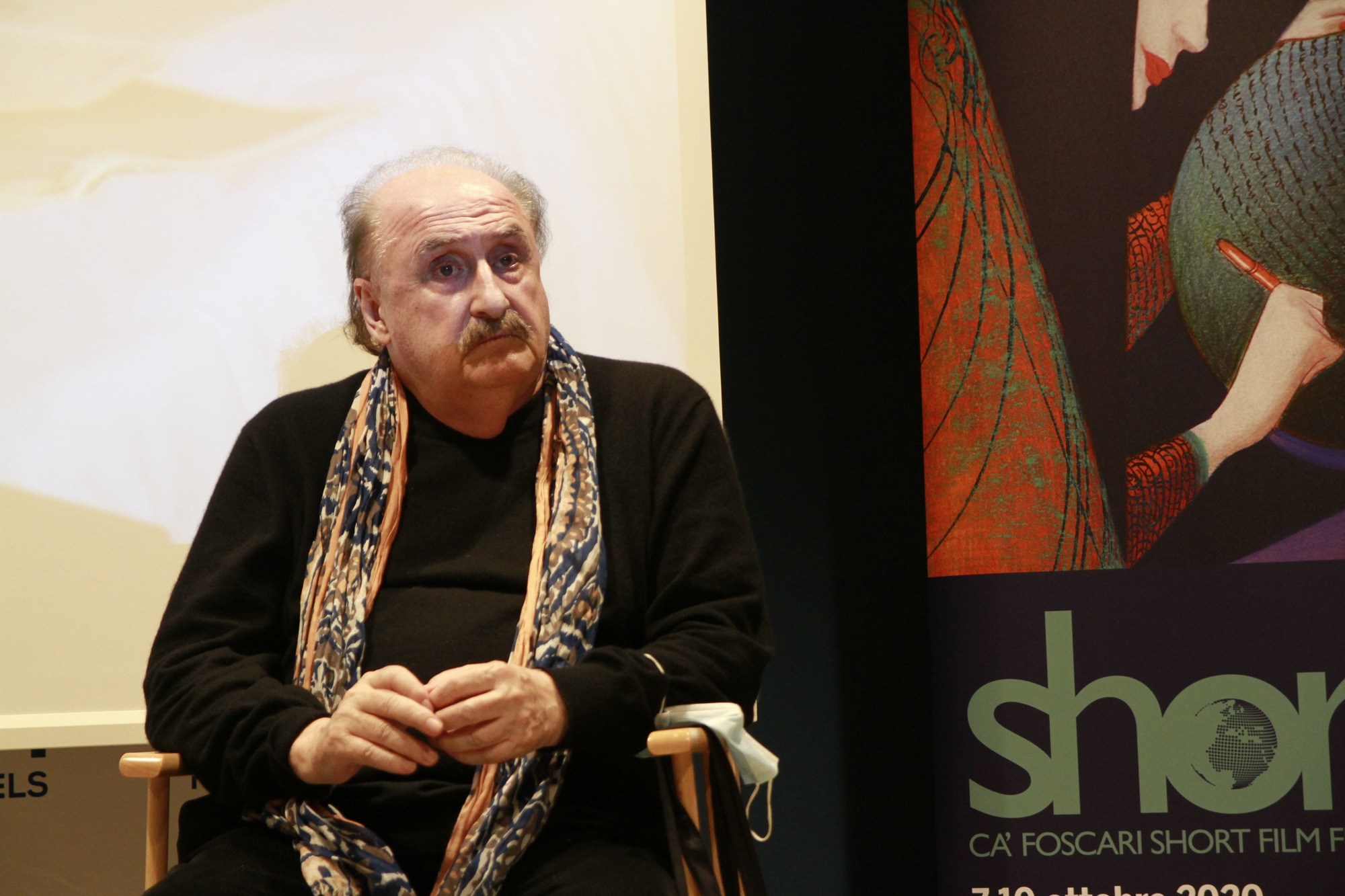 Last night’s meeting with the Master Pino Donnaggio opened with Io che non vivo senza te as background music. The meeting took place at the NH Venezia Rio Novo hotel, and was part of the special programme Short Meets Pino Donaggio. The event was opened by Roberto Calabretto, president of the Ugo and Olga Levi Foundation scientific board, who gave the Master a lifetime achievement award that will be added to the numerous prizes won in more than fifty years. Pino Donnaggio’s artistic career was analyzed through music and images by the jounalist Anton Giulio Mancino, who is currently writing the Master’s biography.

As a songwriter, Donaggio recalls how his songs had already been used as soundtracks for such films as Sandra (1965), Golden Lion winner by Luchino Visconti, and The Assassin (1961), Elio Petri’s debut. From then on, becoming a film composer was a product of “fate”, as the maestro states. He received a call from English producer Peter Katz, who wanted his music for Don’t Look Now (1973). Thanks to this very one soundtrack, Donaggio landed in London, won the award for Best Soundtrack and finally decided to try his career as a compositor.

The turning point in his artistic life was, however, his collaboration with Brian De Palma, that started with Carrie (1976), and was destined to last for another seven films. In the making of Carrie, the director was looking for a compositor after the death of Bernard Hermann, Hitchcock’s memorable collaborator. De Palma chose Donaggio because “he no longer wanted American musicians. He thought I worked with strings in a very similar way to Hermann, that is the reason why he chose me.  He looked for someone who was doing a particular type of music for his suspense and sex films. The luck that I had in America is specifically due to the kind of films De Palma shot, in which there was little dialogue and the scenes mainly came with music, so that it could stand out”.

Love and menace really are the key features of his musical poetics, making him a unique and versatile author, capable of exploiting his talent in much different productions. This made possible for Donaggio not to limit himself only to horror or thriller, but to experiment also with comedies – Nothing left to do but cry (with Benigni and Troisi), 7 kilos in 7 days (with Verdone and Pozzetto), Gunslinger’s revenge (with Pieraccioni and Bowie), social dramas (The Moro case and Giovanni Falcone by Giuseppe Ferrara), and television. In America he was then consecrated definitively by packaging the soundtracks of masterpieces of the image-music relationship such as Dressed to kill (1980), Blow Out (1981), and Body double (1984).

Another song closed the meeting, Ruby Rain, taken from Argento’s Trauma which inspired some questions from the audience regarding his relationship with the Italian director: “He had also worked with the Goblins and Morricone. Dario understands a lot about music, he knows what he wants and goes from jazz to funky, up to classical. He likes to vary according to the movie he is making. For Trauma he even came to Sofia to listen to the orchestra. “

Giuseppe “Pino” Donaggio was born and raised in Burano, Venice, in a family of musicians that introduced him to music from a very young age. In 1961, he made his debut as a singer-songwriter with the song Come Sinfonia at the Sanremo Music Festival, obtaining considerable success. However, international recognition came along in the 1965 edition of the Festival, when he competed with the song Io che non vivo (senza te); thanks to the numerous cover versions of this song, for instance You don’t have to say you love me by Elvis Presley, he entered the selling charts of many countries. In 1973, Nicholas Roeg involved him in the composition of the soundtrack for the movie Don’t Look Now, set in the hometown of the musician. This work awarded him the prize of best soundtrack of the year. The productive artistic partnership with Brian De Palma began a few years later, resulting in the composition of eight soundtracks for just as many films. During his long career he has composed more than eighty soundtracks, outcome of his work with famous international directors, such as Joe Dante, Herbert Ross, Michael Winner and Gene Saks. He worked with names of the Italian cinematographic panorama as well: Dario Argento, Pupi Avati, Liliana Cavani, Sergio Rubini, Michele Placido, Tinto Brass, Cinzia TH Torrini and many others.

The final day of Ca’ Foscari Short Film Festival 2020 was opened with Short meets Amit Dutta, a focus on one of the most important Indian documentary film director edited by Cecilia Cossio, who each edition brings the audience of the Short to discover new sides of multi faced Indian film overview. Born in 1977, Dutta graduated in cinema and right away realized his first works. Both Indian and foreign critics wrote about him, emphasising the experimental and unique nature of his cinema of knowledge and associating to it the definition “prayoga”, a Sanskrit term that refers to the meanings of “experiment”, “project”, “representation”, or “practice”. However, his work is unfortunately little seen and poorly supplied in his country, perhaps due to the philosophical quality of his cinema. The Short introduced three representative works of this experimental documentary film director: Jangarh: Film ek – Jangarh: Film One of 2008, that stands out, backwards, the career of the tribal artist Jangarh Singh Shyam since his suicide at a museum in Japan; then The Museum of Imagination – A Portrait in Absentia in 2012, which is about the encounter with art historian B.N. Goswani on the trail of miniaturist Nainsukh and, finally, Chitrashala – House of Painting in 2015, that accompanies the viewer on a journey to discover the miniatures of the Amar Mahal, the palace-museum of Jammu, where during the day, the miniatures are only artefacts put in plain view, while at night they animate and come to life, illustrating an ancient story.

The last programme before the closing ceremony was the traditional appointment with the three jurors of the contest, an important opportunity to learn more about these extraordinary women and also to hear them present their values. The Polish actress, Maria Mamona, started presenting to the public the most recent short film, Elizabeth of Wojciech Klimala, of which she plays the leading role. In this short film Maria interprets the difficult role of a woman who begins to manifest the first Alzheimer’s symptoms. Followed by Sulafa Hijazi, a Syrian animator and video artist, introducing two of her most recent work: Red Shoes, on the relationship that binds our body with the space in which we live, and the video-clip Drops that tells the bodies in their virtual dimension. Finally, clips from the most famous works of Jun Ichikawa, Italian-Japanese actress who worked with some of the most influential directors of Italian cinema such as Olmi, Silver and Tornatore, were screened.

This evening, finally, will take place the closing ceremony of the festival with the awards of the winners, the awarding of the Ca’ Foscari Honorary Fellowship to Dario Argento and the great closing show dedicated to Federico Fellini by Igor Imhoff.