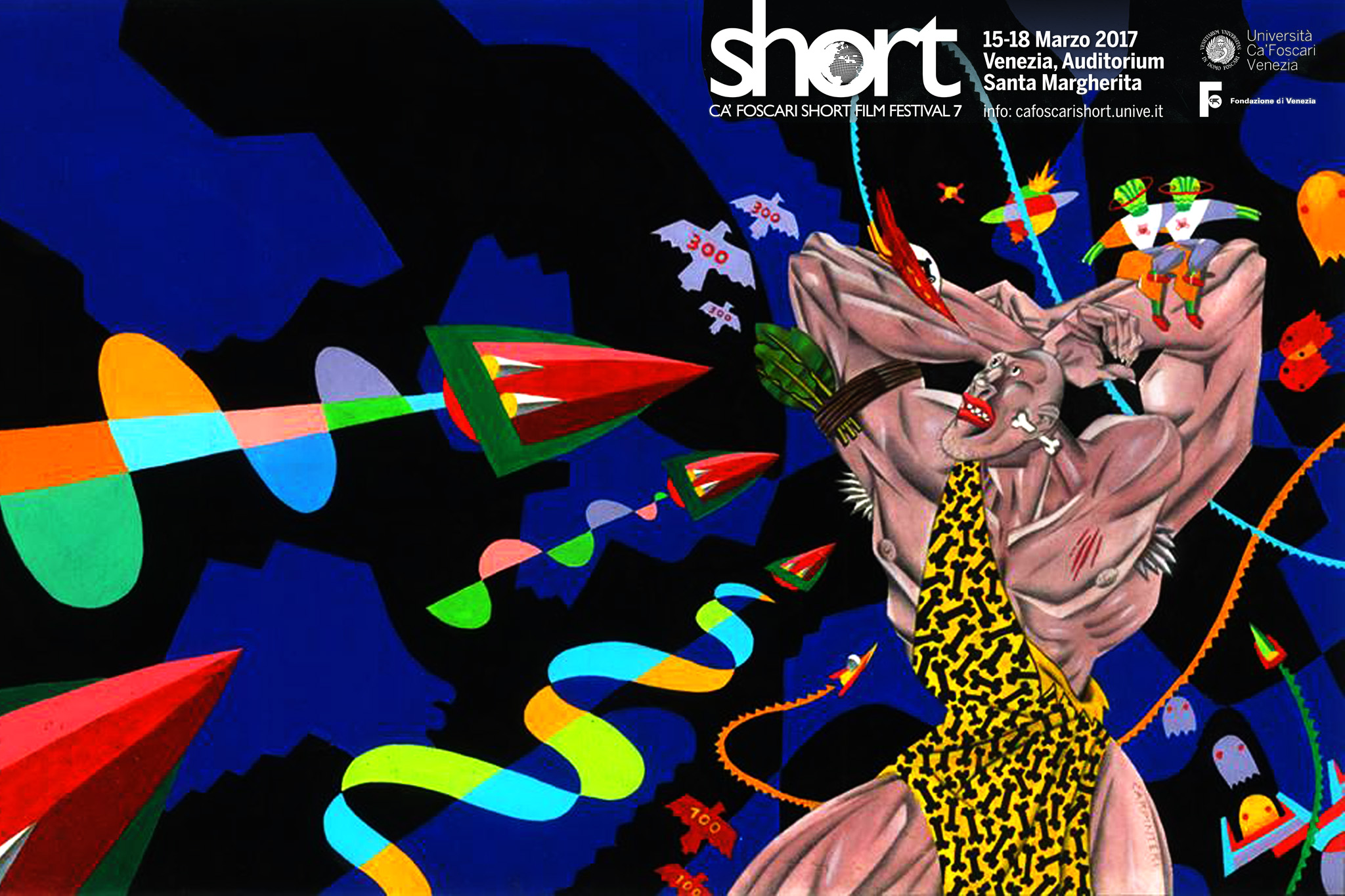 Poster and Jury Members for the 2017 edition revealed 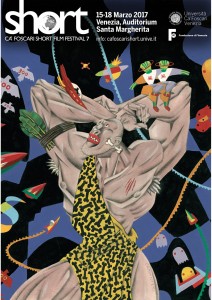 THE POSTER FOR THE SEVENTH EDITION IS DESIGNED BY GIORGIO CARPINTERI.

THE JURY MEMBERS OF THE COMPETITION ARE: CATHERINE BREILLAT, MALGORZATA ZAJACZKOWSKA AND BARRY PURVES.

From 15 to 18 March 2017 the spotlight will be on the Auditorium Santa Margherita in Venice for the seventh edition of the Ca’ Foscari Short Film Festival. Strengthened by the success of the past editions, the festival welcomes the public with its cornerstones and new changes, first of all the poster, for the first time designed by the artist Giorgio Carpinteri.

The Festival –carried out with the partnership of Fondazione di Venezia – is dedicated to short films and it is the first in Europe to be entirely conceived, coordinated and managed by a University (Ca’ Foscari University of Venice). The beating heart of the festival is the International Competition, a selection of thirty short films made by students of different Schools of Cinema and Universities from all over the world. It is enriched by several Special Programs, which are going to be announced here in Venice on 2 March 2017 during the press conference. Bestowing the prizes will be the duty of the judging panel, which, as in the past editions, gathers three prominent figures in cinema, starting from the great French film-maker, actress and writer Catherine Breillat, author of films such as À ma soeur! and Romance, which provoked passionate debates due to their free and explicit representation of sexuality. Another female presence is the Polish actress Malgorzata Zajaczkowska (known in the U.S.A as Margaret Sophie Stein). True celebrity in her homeland, she starred in world-renowned films such as Woody Allen’s Bullets over Broadway. Last but not least, Barry Purves, one of the greatest English animators, specialised in stop-motion and nominated to the Oscars for Screen Play. He has also contributed to films such as Tim Burton’s Mars Attack! and Peter Jackson’s King Kong.

The visionary poster of this year (a sort of Palaeolithic Saint Sebastian, towards which different forces of contemporaneity converge: the ideal representation of the Festival’s multicultural dynamics) is by Giorgio Carpinteri, who will be present during the festival to meet the audience. Illustrator, cartoonist and painter, he has worked with the major Italian comics magazines, like Il Mago, Nemo, Frigidaie and Linus. His short fictions have been collected in various volumes, such as Flirt e Incrocio magico. In 1983 he was one of the founders of the Valvoline Motorcomics group, managing a comics insertion on Alter Alter. His graphic novel, Polsi sottili, published during those years, has been just been elegantly re-edited by Coconino Press. During the following years, he worked for several newspapers, such as Dolce vita, founded by the Valvoline group. Since 1986 he has also been artistic director and author of television programs, whilst designing posters and advertisement campaigns. 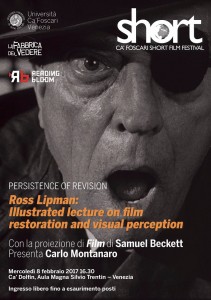 Among the news of this seventh edition is the institution of the first International Music Video Competition, dedicated to music videos created by University and Schools of Cinema students from all the world.

Persistence of Revision will be shown as a preview of the actual Festival. This event will take place on 8 February, at 4.30 PM in Aula Magna Trentin, Venice, with the screening of the restored version of the famous Film (1965) by Ross Lipman, a movie intertwining the geniuses of Buster Keaton and Samuel Beckett. The copy of the movie has been preserved from the UCLA Film and Television Archive. The short film, which stayed unscreened for too long, will be accompanied by the showing of a few clip-selections from Notfilm, cine-essay directed by Lipman himself, which makes use of archive materials and unpublished interviews to recall the tricky production of the play and the enchanting “non-collaboration” between the two artists. The program will be presented by the cinema historian and Short Film Festival collaborator Carlo Montanaro, in collaboration with Letizia Gatti and the film distribution company Reading Bloom.