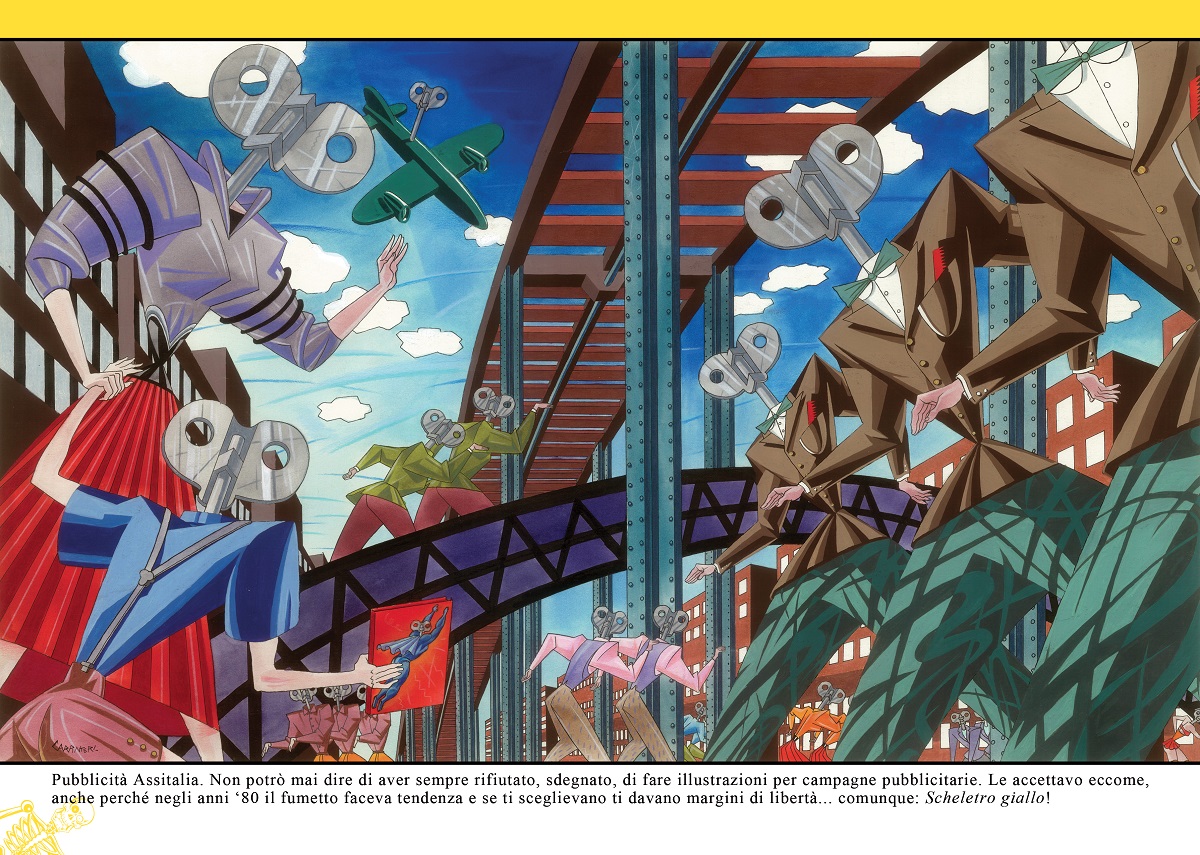 THE WORLD OF GIORGIO CARPINTERI

Venice, 17th March 2017. Giorgio Carpinteri was one of the protagonists of the second day of the festival. He is the author of this year’s poster for the Short Festival and he was also the guest of a Special Program in which he was interviewed in depth by Davide Giurlando, animation and comics expert.
Carpinteri graduated from Dams, Bologna, a university that in the 70s was famous for its open attitude towards imagination, art and entertainment. It was the era of free radios that used to broadcast new wave music programs, the era in which people entrusted themselves to radio hosts to find out the world’s news. Carpinteri believes that the Internet era has modified the way people listen to music since songs can be obtained extremely easy. Young people in the past didn’t have this kind of opportunity; vinyls were meant to be listened to for months all over again and by that the artist could be understood better. Nowadays musical pieces are quickly used, as it happens to comics, films e other cultural products. Then, the topic moved to the use of social networks and to how they changed the fruition of contents such as the artistic subjects. According to Carpinteri they are a mean that could be used to spread his own work and also to remember the works of other famous artists who came across his path, such as Andrea Pazienza, Igort, Liberatore, Tamburini, but also a self-portrait of the great actress Monica Vitti.

One of his first works, The invisible man (L’uomo inivisibile), was published on Nemo magazine in 1980 and it is considered by some a revisiting of H.G. Wells’s novel known by the same title, but also of The Phantom of the Opera and of The Mummy. Carpinteri denied these interpretations and he declared he wanted to make something that hadn’t been made by anyone else yet and that could have something magical about it. So he considers the quotes attributed to himself as unintentional. In the past comic books has brought feelings and contents that came from other art’s fields, thanks to the sensitiveness of their authors. It also allows to work independently without an already established budget so that there is a great freedom of the artist’s expression. In this situation Carpinteri wanted to express is rage towards a pointless world as he perceived it after the military draft. He tried to do so with a shocking drawing realized mixing in his paintings’ lines the American style and the typical film elements. It was possible also because at that time room screenings where spreading in Bologna. The transversality of comics has allowed the creation of what the artist calls “communicating vessels”, a series of collaboration projects such as the one with acting companies as a scenographer or the one with Societas “Raffaello Sanzio”, an internationally known acting company that gave him the opportunity of realizing a video clip. He also was the protagonist with other authors of a photo shooting for Vanity.

His first graphic novel, Polsi sottili (thin wrists), originated in Bologna between the late 70s and the early 1980s, within the Valvoline group formed by Igort, Lorenzo Mattotti, Marcello Jori, Daniele Brolli and Jerry Kramsky, influential people who made the history of comic books. Rizzoli publishing house entrust them a supplement on its own magazine “Alter Alter”. Carpinteri wrote in this magazine Polsi sottili, a long novel that separates itself from his standards, since he wanted to engage in something new. He usually writes short stories, devising his comic book as a synopsis of concepts, on top of that he uses these stories to make the reader find in himself those elements that are important. He is happy anyway because he was able to establish stimulating cooperation with other artists.

Comparing his actual situation with the one he emerged from, Carpinteri believes that right now the publishing business is more related to long stories and not to the short ones, which could offer the opportunity to create something new in a brief period of time. Today comic book has to make way for graphic novel, close to novel, that starts and ends in a single book, avoiding the creation of characters that remain. Even though production methods have changed, this didn’t affect the quality of his work.