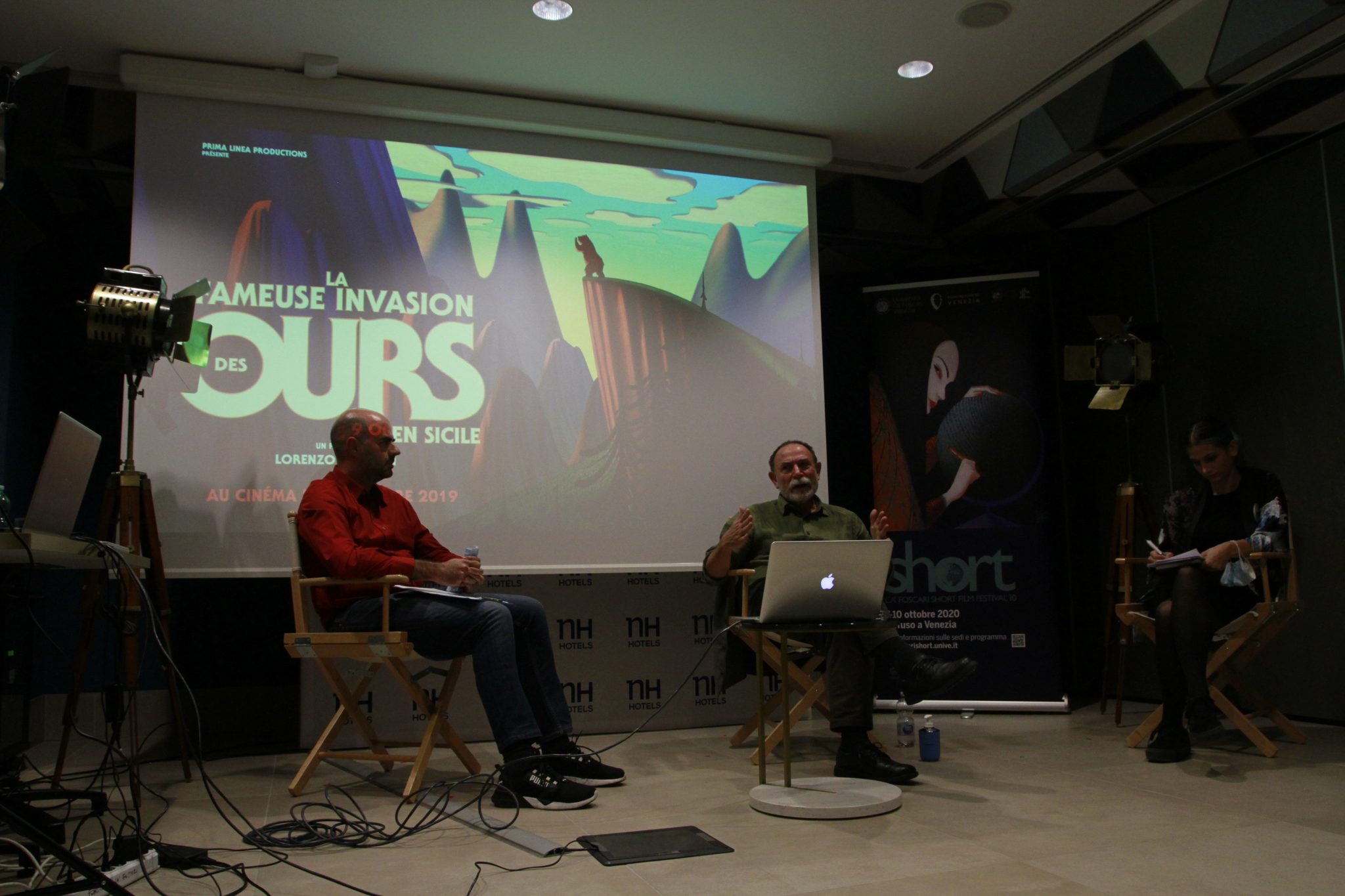 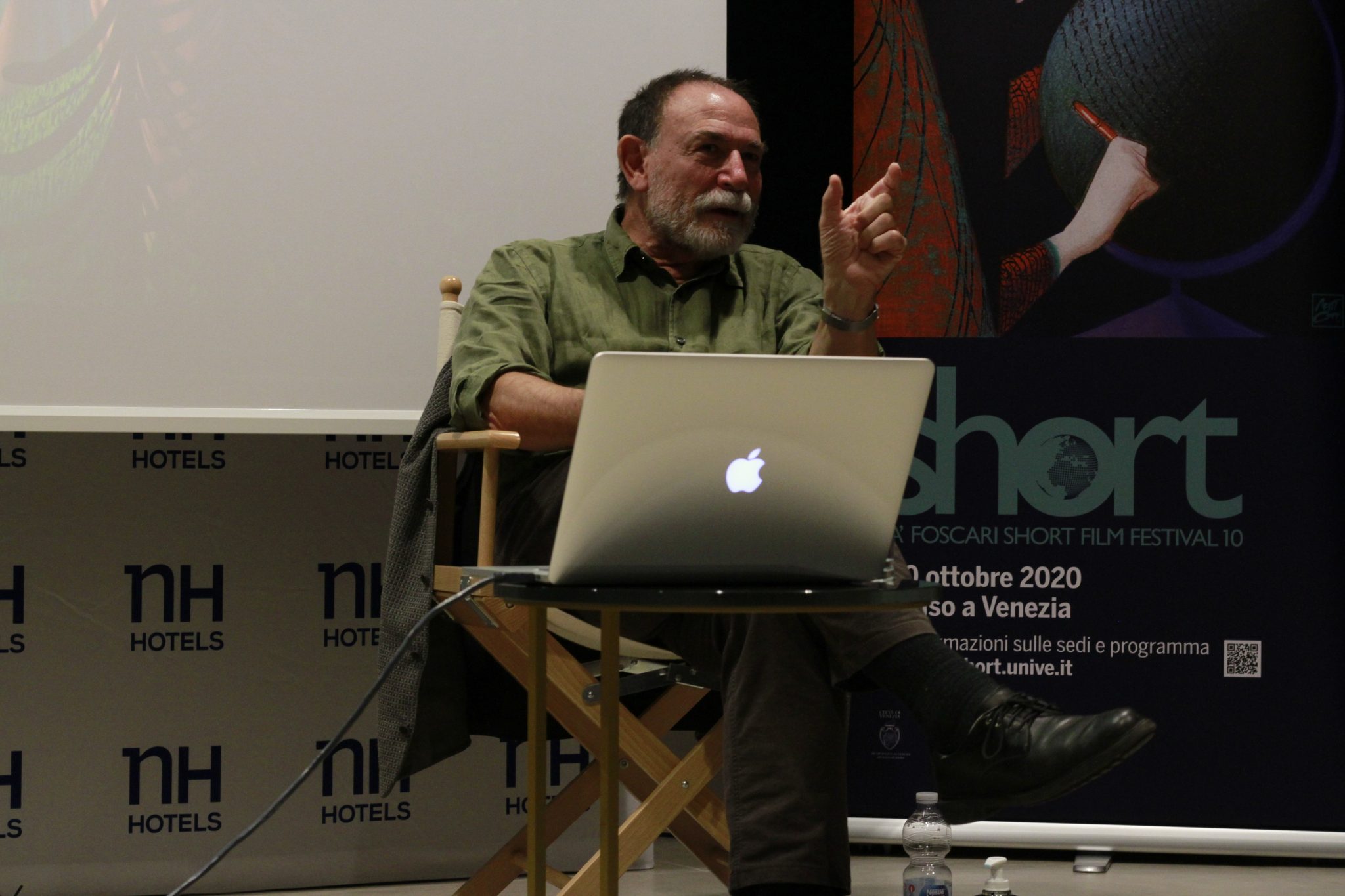 LORENZO MATTOTTI: IMAGINATION AND CREATIVITY WILL SAVE THE WORLD

IMAGINATION AND CREATIVITY WILL SAVE THE WORLD

A JOURNEY IN THE DIVERSIFIED UNIVERSE OF LORENZO MATTOTTI

Yesterday’s protagonist at Ca’ Foscari Short Film Festival was the worldwide known director and illustrator Lorenzo Mattotti, author of the poster of this 10th edition. As he talks with the animation and comic expert Davide Giurlando, Mattotti remembered his forty-years career, first from the collective Valvoline in Bologna, and then to the covers realised for magazines such as The New Yorker and Le Monde, up to his film collaborations. Lot of time was dedicated to his first feature film as a director, the animated La famosa invasione degli orsi (The Bears’ Famous Invasion of Sicily) in Sicilia, projected during the pre-opening of the Festival.

His artistic career started with comics. Inspired by Pratt and Crumb’s “artisan” idea of comics production, but also by the foundation of Corriere dei Piccoli. The idea of creating comics comes from the desire to translate his personal reality into images: from the cultural movements of his time, from theatres and rock music, without neglecting the relationship between young people and small-town festivals. An artistic language that he has therefore developed as “an interior journey that becomes a pictorial representation, without any distinction between high and low culture”.

Mattotti’s evolution is fast, especially at the beginning: from bright colours to black and white experiments, such experiences lead him to develop different styles that later become almost cinematic languages. The author, in fact, has always thought of his stories as a form of cinema or literature: “Every story was an opportunity to explore a world, a graphic expression“. Starting from a precise style (like the clean and essential mark) the narrative experience was expressed in an artistic form. Let’s take in consideration, for example, the stories inspired by expressionism or Bacon as in Dr. Jekyll & Mr. Hyde, or the 17th century painting in Cabot, or American realism in The Sound of Frost. Music also is a field in which the author has shown his interest, as in his collaboration with Lou Reed for The Raven, based on Edgar Allan Poe’s poem. Later, Mattotti introduced a new way of experiencing black and white, with reminiscent images of storyboards. These are accompanied by the exploration of the fantasy world through the support of a metamorphic sign in constant transformation: an idea that comes close to animation. The metamorphosis as common denominator then comes to life thanks to his iconic posters, in particular those for the Venice Film Festival, and with the lively opening theme on the Festival’s screen.

The last part of the meeting has been dedicated to his first film as director, La famosa invasione degli orsi in Sicilia (The Bears’ Famous Invasion of Sicily). According to the author, the relationship between Buzzati and Sicily is particularly interesting; “perhaps, Sicily was the exotic world of Buzzati’s imagination, a distant world” he states. Starting from the very writer’s drawings, Mattotti has mixed mountain chains and high peaks with the warm and vibrant colour of the Mediterranean Sea. Buzzati, as a matter of fact, was fond of mountains. The author, with the grace and kindness that characterize him, has then answered the audience’s questions. He focused, among other things, on the relationship between aesthetic and Buzzati’s characters, and on his collaboration with Andrea Camilleri. The famous writer from Sicily, in fact, voiced the elderly bear. “To dub the old bear, Camilleri immediately came to mind. He was a great charismatic narrator with a cavernous voice. At the time, Camilleri was already blind, so the work done by the dubbing director and the sound engineers was extraordinary”.

Mattotti, while outlining his bond with Buzzati’s drawings, also underlines that his modus operandi lies in his ability to capture Buzzati’s original ideas and transforming them to evidence the unique aspects of the characters without changing their original nature. Let’s think, for instance, about Ambrosis, the character with such a pointy body, almost similar to an insect. In particular, a great operation was made on the volumes and on the adaptability of the characters and landscape. “Playing with volumes and elasticity made the characters much more cinematic, also due to the work on shadows carried out by a specific team; every character has its own shadows, and they permeate with the surrounding world”. Dino Buzzati’s pieces of work, in specific Poema a fumetti (1969), have always been part of the author’s imagination, and they have influenced his aesthetic and narrative approach. “The fact that a writer such as Dino Buzzati published a comic book, meant that they were important”. The speech was concluded with the most important teaching that the film’s final seems to suggest; “it’s with imagination and creativity that complex issues can be solved and children can teach us a lot on this”.

Lorenzo Mattotti was born in Brescia in 1954 and realised his first comics in 1975. He then joined the Valvoline in Bologna organization, publishing on the “Alter alter” historical supplement some of the works that made him famous, such as Il Signor Spartaco (1982) and Fuochi (1984). Always in close contact with the cinema, he made beautiful drawings (almost a film itself, in three different styles) that connect episodes of the collective film Eros, directed by Michelangelo Antonioni, Steven Soderbergh and Wong Kar-wai. He later contributed with his unmistakable trait to Pinocchio (2012) by Enzo D’Alo. Even if living in Paris for years, Mattotti has a special connection with the city of Venice, where he spent his university period and to which he dedicated the magnificent illustrated volume Venice Scavando nell’acqua (2011). His talent is now recognized worldwide, giving him the chance to take part in numerous international collaborations, including those with The New Yorker and Le Monde for Cannes Film Festival. Last but not least, he collaborated with Venice Film Festival, creating its manifesto and its theme song. Ghirlanda (2017) is his latest graphic novel.